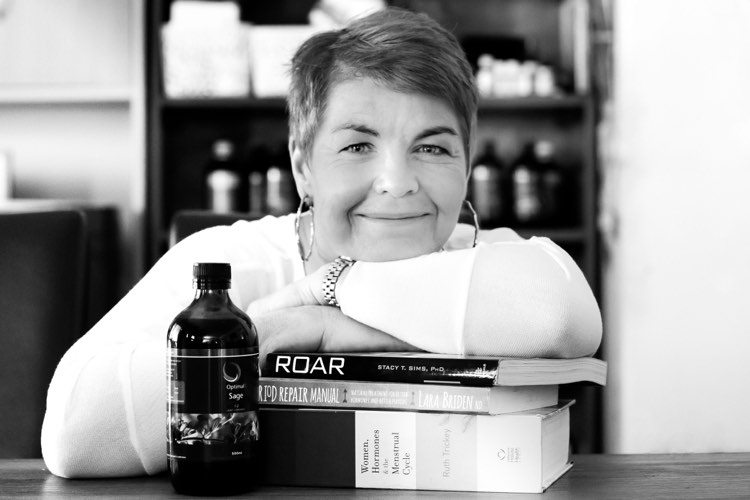 I see that you don’t appear as often to me anymore, sometimes its as long as 60 days now.

I have to say though when you do appear, you really seem to make quite an impact – the blood flow you bring is a whole lot heavier than it has been in a number of years!

I know that this happens though. With progesterone pretty absent and without ovulation, I understand that it’s because there’s oestrogen that has nothing to oppose it as it did in the years that I was ovulating.

I know you’re doing your best.

There are women that I am helping through late stage peri menopause that have severe flooding every month because of hormonal balance changes so I know that I’m lucky.

Others have hot flushes, sleep problems and severe mood changes.

I definitely know that my mood can be, well, sensitive at times but I’ve been able to keep it pretty even with the herbs I take. I really wish there was a greater appreciation of what women experience in peri menopause and menopause though.

I mean, given that 50% of the population experiences it at some point in their life there really should be better understanding of it.

I can’t really complain though. I really feel like that you have been kind to me, now and over the years. Maybe that’s lucky genes, we know that can play a part.

Even in the earlier years you came and went pretty unspectacularly. Which is really what you are after in a menstrual cycle! Arrive without too much fuss, have a reasonable bleed but not flood and not drag on and on and on.

I treat women who are bed ridden for a day or two of their cycle and simply can’t function. Some of them have been told that this is normal.

Breaks my heart to think that women are being told to put up with severe pain and that it’s all part of being a woman. Such bullshit. There would be a medical uproar if there was a condition that rendered men unfunctional for a day or more.

I’ll never forget the woman I treated in my early years as a Naturopath who, when I asked her what her menstrual cycle looked me in the eye and said, “basically for a day I’m curled in the corner of the bathroom in the foetal position, vomiting, shitting myself and bleeding like I’ve been stabbed”. It was the first of many times I would have to conceal my rage at a system that had no answers for women like that, and if we are being honest, still really doesn’t.

Since understanding what some of the true repercussions of the oral contraceptive pill are, I feel so grateful that for a good part of my life I was too lazy to take the pill to impact you menstrual cycle. I used to make boyfriends use condoms.

It really worries me that there is a whole population of women, particularly teenagers, that don’t know that the pill can have repercussions on so many aspects of their health. I didn’t until I started studying Naturopathy. I say this A LOT but the upshot is that the pill regulates jack shit. It completely suppresses your natural cycling hormones and so you do not get their benefit.

I thank you my amazing menstrual cycle for giving me the beautiful oestrogen and progesterone that helped every single part of my body over the years. My brain, my muscles, my energy, my immune system, my gut health, my heart health, my ability to use fat and carb as energy, my feel good neurotransmitters. I have a better chance of good health in my later years because of you.

And of course, when I was ready you gave me my two boys.

There is not enough thank you’s in the world for that and I will work tirelessly to help other women have this if that is what they want.

Many of my friends of my age (a super young 52, lol…) are happy to see their menstrual cycle go and launch into menopause but I admit, it makes me a bit sad.

You made me the woman that I am menstrual cycle, and I thank you for it.